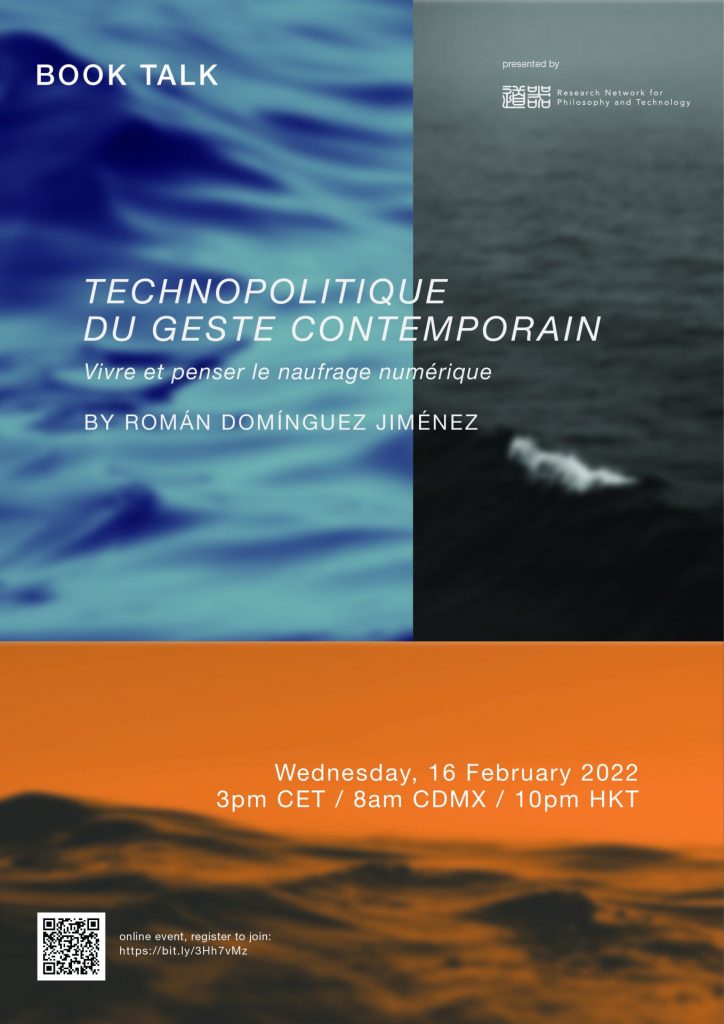 “On Technopolitics: The Task of Gesture” by Román Domínguez Jiménez

Presented by the Research Network for Philosophy and Technology

This seminar will be held in English and is based on Roman Dominguez recent book: Technopolitique du geste contemporain. Vivre et penser le naufrage numérique (Paris: L’Harmattan, 2021) in French: https://bit.ly/3J9CP0h

What is technopolitics? Why do we have to add such a pompous and perhaps useless term, to the already saturated network of terms, definitions and concepts of contemporary theory? Certainly, this term seems obvious: technopolitics would be the politics of technology. But this term can also be understood as a politics that cannot be separated from technology: here, we do not understand technology only as a particular sphere of human endeavor, but as a factual, aesthetic, and attitudinal condition of any politics that claims to be contemporary. I consider that to be contemporary today (redundancy aside) is less about sharing a horizon of meaning and knowledge than sharing a sensibility and way of expression; sharing a certain way of understanding, reacting, participating, and constructing events. Contrary to Agamben, who thinks that the contemporary is only the one who glimpses the light that comes from the past through the darkness of the present, I believe that all of those who, beyond all differences and all subtleties of interpretation, share a destiny, or lack of a destiny, are our contemporaries.

I believe that our destiny as a human collective is defined and will be defined in the years to come, by the way in which we will assume the couplings of our modes of thought, but above all, the couplings of our sensitivity and our most intimate movements, to the evolution of the digital sphere. It can be assumed that these couplings will not be done in a single manner that there are and will be many ways to stand up to this challenge: in local, global, cultural, political and economic ways. But what interests me here is not so much the diversity of solutions, as important as they are, but the common ground or plan they presuppose. In my view, this common plan is grounded on a collective change of attitude towards the present and towards destiny. A change which, even if it resonates with attitudes of the recent or ancestral past, is already different from any other past attitude, even if this attitude comes from a very recent past.

There is no destiny without Cosmos. Yet, if we follow Simondon’s approach, we cannot grasp the Cosmos, the Universe, without the mediation of aesthetics. This mediation passes through the filter of culture and thus through the technical solutions that each culture possesses in order to give its own appearances. Jean-Louis Déotte called these solutions “apparatuses” (appareils), and their modes of collective appropriation “cosmetics”, in the sense that these cosmetics do not configure a simple decoration, but a singular way of appearing, a way of confronting itself and insinuating itself in the Cosmos and in front of others. For Deótte, cultures are defined less by their degree of apprehension of a definitive reality than by the hallucinations, the phantasmagorias, and the relations towards destiny (the Law, according to Déotte) that they are capable of constructing and demolishing the appareils at their disposal: myth, fable, sacred texts, perspective, photography, film.

It is already commonplace to say that contemporary humanity lacks an experience of the Cosmos. However, the task of contemporary technopolitics would be nothing other than searching for the techno-aesthetic appropriation of Cosmos by the means of collective couplings with the digital sphere and through the means of the digital sphere. These couplings will imply a sensorimotor and notably a gestural work within the apparatuses at our disposal. Even and especially if these apparatuses are already emerging right before our eyes under the frightening, but sometimes also fascinating, figure of a global and almost transcendental (in Kant’s sense) video game.

Román Domínguez Jiménez is Professor at the Instituto de Estética, Pontificia Universidad Católica de Chile, in Santiago de Chile, where he teaches undergraduate and graduate courses. His research concerns modern and contemporary philosophy and aesthetics, philosophy of film and philosophy of technology.