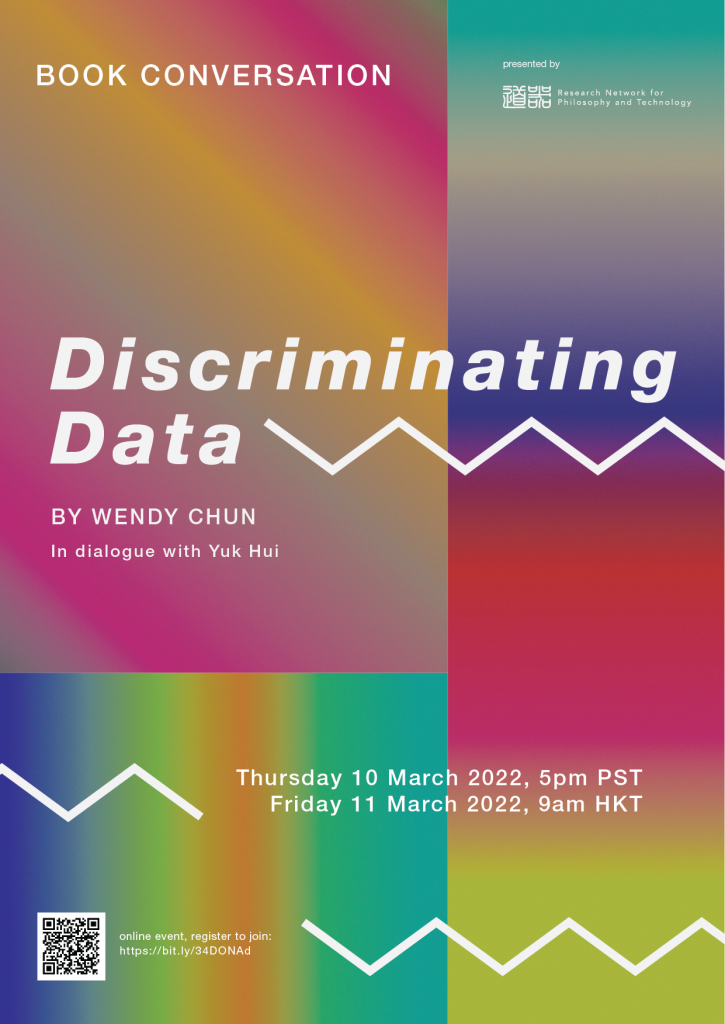 In dialogue with Yuk Hui

In this event, Wendy Chun will discuss her latest book Discriminating Data (2021, MIT Press) in conversation with Yuk Hui.

In Discriminating Data, Chun reveals how polarization is a goal—not an error—within big data and machine learning. These methods, she argues, encode segregation, eugenics, and identity politics through their default assumptions and conditions. Correlation, which grounds big data’s predictive potential, stems from twentieth-century eugenic attempts to “breed” a better future. Recommender systems foster angry clusters of sameness through homophily. Users are “trained” to become authentically predictable via a politics and technology of recognition. Machine learning and data analytics thus seek to disrupt the future by making disruption impossible.

Chun, who has a background in systems design engineering as well as media studies and cultural theory, explains that although machine learning algorithms may not officially include race as a category, they embed whiteness as a default. Facial recognition technology, for example, relies on the faces of Hollywood celebrities and university undergraduates—groups not famous for their diversity. Homophily emerged as a concept to describe white U.S. resident attitudes to living in biracial yet segregated public housing. Predictive policing technology deploys models trained on studies of predominantly underserved neighbourhoods. Trained on selected and often discriminatory or dirty data, these algorithms are only validated if they mirror this data.

How can we release ourselves from the vice-like grip of discriminatory data? Chun calls for alternative algorithms, defaults, and interdisciplinary coalitions in order to desegregate networks and foster a more democratic big data.

Wendy Hui Kyong Chun is Canada 150 Research Chair in New Media in the School of Communication, and Director of the Digital Democracies Institute at Simon Fraser University. She has studied both Systems Design Engineering and English Literature, which she combines and mutates in her current work on digital media. She is author of Control and Freedom: Power and Paranoia in the Age of Fiber Optics (MIT, 2006), Programmed Visions: Software and Memory (MIT 2011), Updating to Remain the Same: Habitual New Media (MIT 2016), and Discriminating Data (2021, MIT Press), and co-author of Pattern Discrimination (University of Minnesota + Meson Press 2019). She has been Professor and Chair of the Department of Modern Culture and Media at Brown University, where she worked for almost two decades and where she’s currently a Visiting Professor.