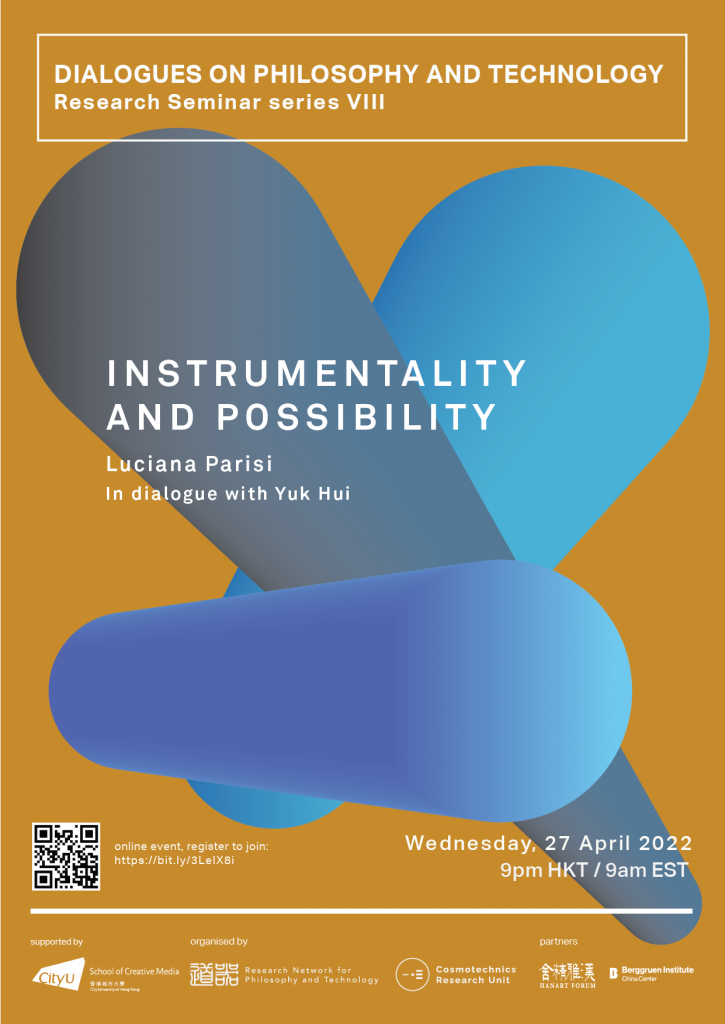 Luciana Parisi: Instrumentality and Possibility
In dialogue with Yuk Hui

In this seminar, Luciana Parisi will discuss instrumentality and possibility in relation to computational systems. The talk will be followed by a dialogue with Yuk Hui.

Instrumentality generally defines a correlation between means and ends and can be set up to question the correlation between technology and philosophy. This talk will address instrumentality in terms of the critique of instrumental reason and its legacy in contemporary discussions on intelligent automation in the context of global computational capital. By drawing on American pragmatism, this talk proposes a notion of instrumentality that refuses the equation of the medium with thinking and of the datum with the ideatum. Instrumentality can rather offer alternatives for dialogues on philosophy and technology. The crisis of transcendental reason that returns in the computational configurations of racial capitalism (the extraction/abstraction of the flesh, land, water, oil, cognitive, creative, and social labour in algorithmic rules and data infrastructures) becomes a radical possibility for hacking the equation of instrumental reason at the core of Western metaphysics. As much as the myth of Prometheus appears to intensify the global speciation of knowledge – where the gendering, racializing and sexualizing conditions of knowing are recursively repeated across culture – so too do intelligent automation falls short of fulfilling the universality of the manifest image of man: the mismatch between thoughts and means can no longer be repaired.

Luciana Parisi is a Professor at the Program in Literature and Computational Media Art and Culture at Duke University. Her research is a philosophical investigation of technology in culture, aesthetics and politics. She was a member of the CCRU (Cybernetic Culture Research Unit) and currently a co-founding member of CCB (Critical Computation Bureau). She is the author of Abstract Sex: Philosophy, Biotechnology and the Mutations of Desire (2004, Continuum Press) and Contagious Architecture. Computation, Aesthetics and Space (2013, MIT Press). She is completing a monograph on alien epistemologies and the transformation of logical thinking in computation.