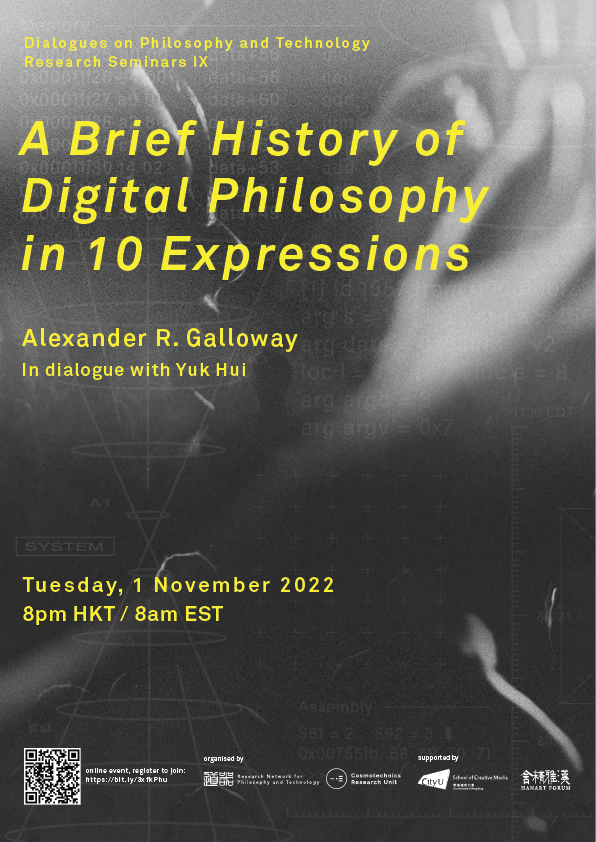 A Brief History of Digital Philosophy in 10 Expressions

What does it mean to speak of “digital philosophy”? While often appealing to physics or computer science more than philosophy proper, digital philosophers are those who claim that the world is discrete at its most fundamental level. (The moniker “digital physics” is also sometimes used as a synonym.) Digital philosophers furnish evidence for their claim by appealing to the natural world—in, for example, the discrete spin states of subatomic particles, or the encoding capacities of DNA. Yet in this talk, we will approach digital philosophy not as a thesis about nature but as a specific decision within the act of doing philosophy. We will explore this decision through a series of simple mathemes–10 of them –including some alternative formulas that have refused or otherwise departed from the long history of digital philosophy.

Alexander R. Galloway is a writer and computer programmer working on issues in philosophy, technology, and theories of mediation. He is Professor of Media, Culture, and Communication at New York University. He is the author of several books on digital media and critical theory, including Uncomputable: Play and Politics in the Long Digital Age (Verso, 2021).