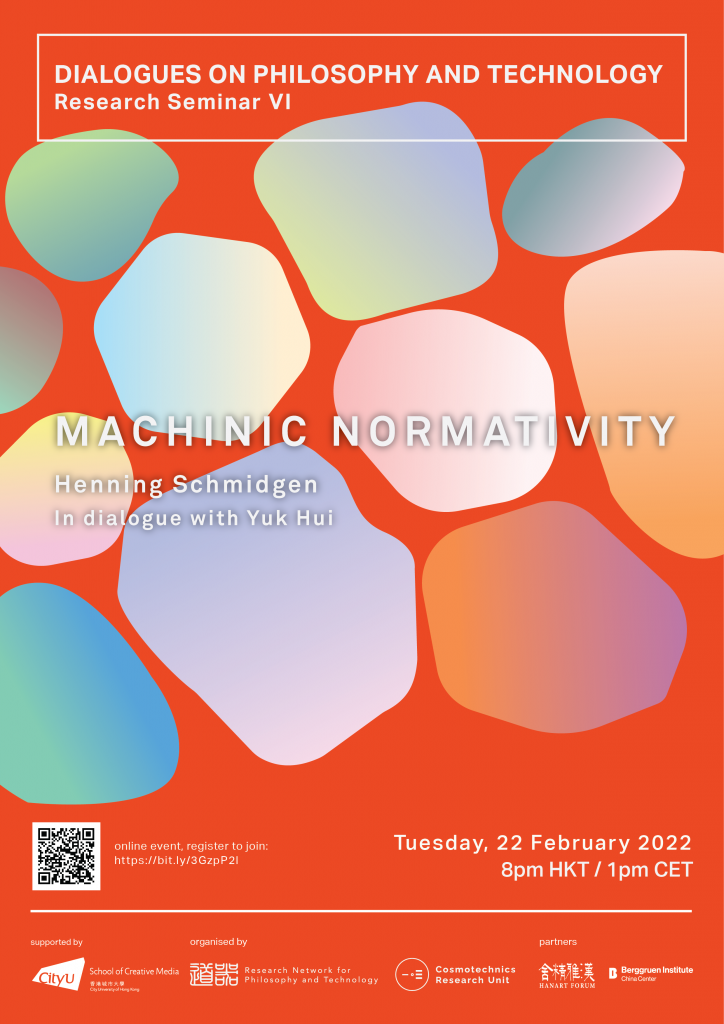 In today’s society, technologies are often perceived as helpful and fruitful “modes of existence” that facilitate and improve the lives of their users. At the same time, they are often experienced as limitations and constraints imposed on us by more or less abstract bodies and powers. The use of digital technologies, in particular, is often associated with unclear rules, preconditions, and consequences that limit our capacities for self-determination – and thus also the possibility of normative action. In this situation, it is not only the critique of algorithms, artificial intelligence, and information capitalism that is appropriate and necessary. As I argue, what is also at stake is an extended reflection about “machinic normativity,” i.e., the possibility and capacity for subjective and creative use of technologies.

This talk introduces the idea of machinic normativity by referring to the philosophical tradition of what Gilles Deleuze and Félix Guattari have called “technological vitalism.” I will show that this tradition includes not just Deleuze and Guattari, but also philosophers and physicians such as Georges Canguilhem and Kurt Goldstein. Crucial to this tradition is a biological perspective on “technique” in which it is understood as synonymous with the possibility of shaping one’s environment. Accordingly, our answer to the question concerning technology depends crucially on actualizing this perspective.

Henning Schmidgen is Professor of Media Studies at the Bauhaus University in Weimar, Germany. He studied psychology, philosophy and linguistics in Berlin and Paris. In 1996, he obtained his PhD in psychology at the Free University Berlin. From 1997 to 2011, he was postdoctoral researcher at the Max Planck Institute for the History of Science (Dept. Rheinberger) in Berlin. In 2011, he obtained the Habilitation in history of science and media studies. Between 2011 and 2014 he was professor of media aesthetics at the University of Regensburg.

Bridging the gap between media studies and the history of science, Schmidgen worked extensively on Guattari’s machines, Canguilhem’s concepts, and the problem of time in physiology, psychology, and psychoanalysis. His research is published by journals such as Isis, Configurations, and Grey Room. Among his recent books are The Helmholtz-Curves. Tracing Lost Time (2014), The Guattari Tapes (2019) and Horn, or The Counterside of Media (2022).

Upcoming events include seminars in 2022 with Andrew Feenberg (16 March), Luciana Parisi (20 April), and Carl Mitcham (25 May). Follow our Facebook Page or sign-up to our newsletter to stay up-to-date on upcoming events.