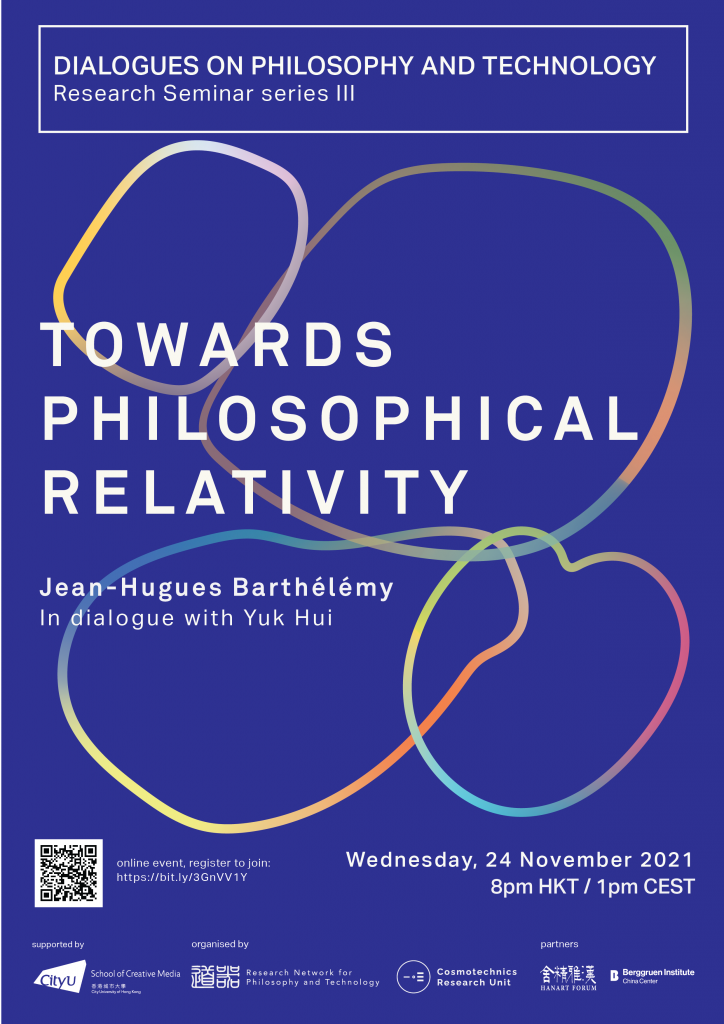 Jean-Hugues Barthélémy
Towards Philosophical Relativity
In dialogue with Yuk Hui

I call Gilbert Simondon’s philosophical doctrine a “genetic encyclopaedism”, insofar as such a doctrine unifies his two doctoral theses: Individuation in Light of Notions of Form and Information and On the Mode of Existence of Technical Objects, and at the same time distinguishes itself from his courses published posthumously. The problem of the unity of these two theses was one of the many problems that I have encountered in my early work to articulate an exegesis of Simondon’s thinking. However, this exegetical work, although animated by the conviction that I could reveal all the strength and relevance of his thought, was in fact always directed towards something Post-Simondon. Even before my doctoral thesis, such effort was guided by the project of a future “all-encompassing refoundation” of his ontology within a new and global system whose first problematics will be a post-Wittgensteinian and post-Heideggerian “philosophical semantics”, and which will bear the name “Philosophical Relativity”. In this new theoretical context, ontology will become a second problematics and no longer a “first philosophy” as Simondon called it. The particularity of such a new and global system is that it does not constitute a system of Knowledge per se, since its globality is the consequence of the diffraction of meanings, a remedy to the traditional objectivation of meanings that knowledge entails, as well as to relativism itself – insofar as the latter still belongs to the objectivation of meanings by a philosophizing individual. This is what an internal criticism of genetic encyclopaedism itself will lead to.

Jean-Hugues Barthélémy is a philosopher and associated researcher at Paris-Nanterre University. He edited the Cahiers Simondon from 2009 to 2015, and directed the Centre international des études simondoniennes from 2014 to 2019. Barthélémy is author of Life and Technology: An Inquiry Into and Beyond Simondon (Meson Press, 2015) and of other reference monographies (2005; 2008; 2014) on the thought of the French philosopher Gilbert Simondon, and has recently published Ego Alter: Dialogues pour l’avenir de la Terre (Paris: Éditions Matériologiques, 2021), after having published his first work of global philosophical reconstruction, La Société de l’invention: Pour une architectonique philosophique de l’âge écologique (Paris: Éditions Matériologiques, 2018). His book, Manifeste pour l’écologie humaine (Actes Sud, 2022) is forthcoming. Jean-Hugues Barthélémy is also a member of the advisory committee to the Research Network for Philosophy and Technology.

The Dialogues on Philosophy and Technology seminar series is initiated by the Cosmotechnics/Critical AI research project, supported by the City University of Hong Kong in collaboration with the Research Network for Philosophy and Technology. The series running from Fall/Spring 2021/22 features talks and workshops with leading scholars in the philosophy of technology and aims to address urgent questions on philosophy and technology today. Upcoming events include a talk by Susanna Lindberg on Bernard Stiegler’s love of music (7 December 2021).