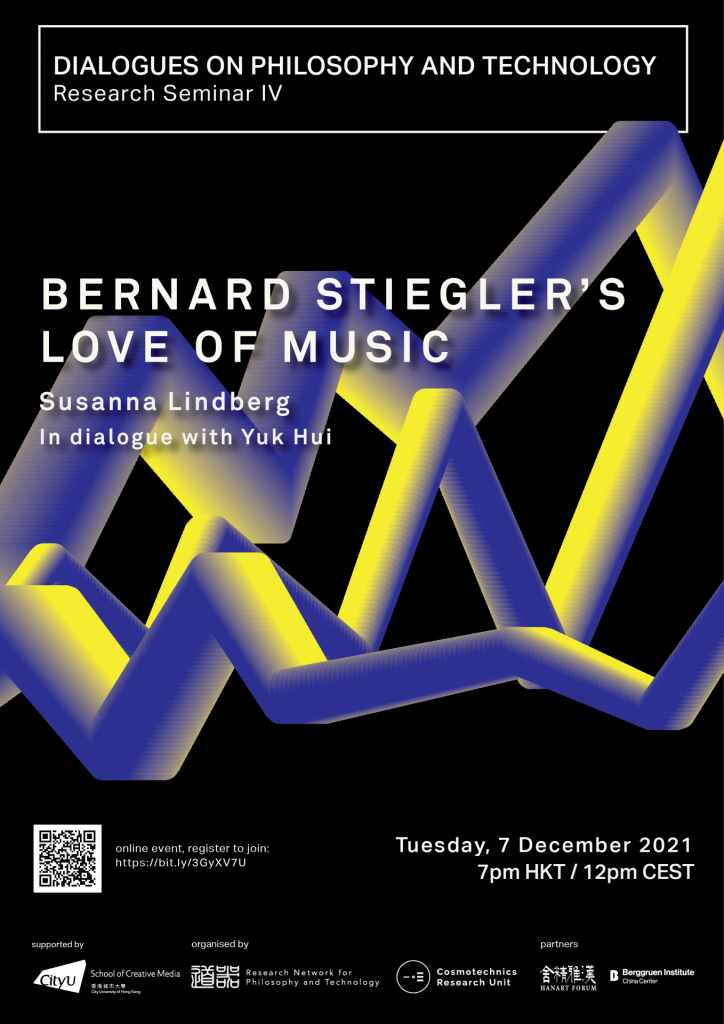 For this seminar for the Dialogues in Philosophy and Technology, Susanna Lindberg will discuss the late philosopher Bernard Stiegler’s love of music and his experience as director from 2002-2005 of IRCAM, the renowned French institution for musical research. The talk will be followed by a dialogue with Yuk Hui.

Bernard Stiegler was neither a musician nor a musicologist. He did not compose his philosophy in a distinctively musical manner. Still his life was tied to concrete musical institutions twice, as owner of a jazz bar and as director of IRCAM. Are the jazz bar and the laboratory of contemporary music just biographical coincidences, or symptoms of a fundamental musical experience with philosophical consequences? In reality, although it may not be so evident at first glance, music constitutes an originary impetus of Stiegler’s philosophical thinking, equal in importance to the more visible (precisely) cinematographic and televisual themes, and more emancipatory than them. Music has for Stiegler a fundamental philosophical role comparable to the role of writing for Derrida, to the extent that Stiegler even says in an interview titled ‘Le circuit du désir musical’ that he has wanted to study in the domain of music the question that Derrida has studied under the name of grammatology.

In this paper, Lindberg will present the ‘heuristic privilege’ that Stiegler accords to music because of its ‘marked instrumental nature that distinguishes it among arts; in the domain of music the process of instrumentalisation not only has begun very early but is ‘originarily manifest’. Music is also the best possible illustration of Stiegler’s core idea of the interlacing of technics and of the time of consciousness. Secondly, Lindberg will show how the question of music structures Stiegler’s diagnosis of the contemporary globalised society interpreted as the epoch of the industrial production of affects. Finally, she will show how music gives ways of escaping the depressing standardisation characteristic of this epoch.

Susanna Lindberg is a professor of continental philosophy at the University of Leiden, Netherlands. She is a specialist of German idealism, phenomenology, and contemporary French philosophy. In recent years, her research has carried on the question of technology. Her publications include Techniques en philosophie (Hermann, 2020), Le monde défait. L’être au monde aujourd’hui (Hermann, 2016), Heidegger contre Hegel: Les irréconciliables, and Entre Heidegger et Hegel: L’éclosion et vie de l’être (L’Harmattan, 2010). She also has edited several collected volumes, notably The Ethos of Digital Environments. Technology, Literary Theory and Philosophy (with Hana Roine, forthcoming at Routledge, 2021), The End of the World (with Marcia Sá Cavalcante Schuback, Rowman and Littlefield, 2017) and Europe Beyond Universalism and Particularism (with Sergei Prozorov and Mika Ojakangas, Palgrave Macmillan, 2014).